It's Your Birthday with Newton's Nook Inky Paws Challenge

Wow, it's been a while since I posted but I've headed into the busiest time of the year at work and I'm just dog tired by the time I get home every night and weekends are busy now too.  I'm sure you all know how that goes.  But I wanted to pop on here to share the card I made for the Inky Paws Challenge over at Newton's Nook.  I love their challenges almost as much as I love their stamps.  This one was all about sparkle and you know how I love that.  You can find the challenge here. 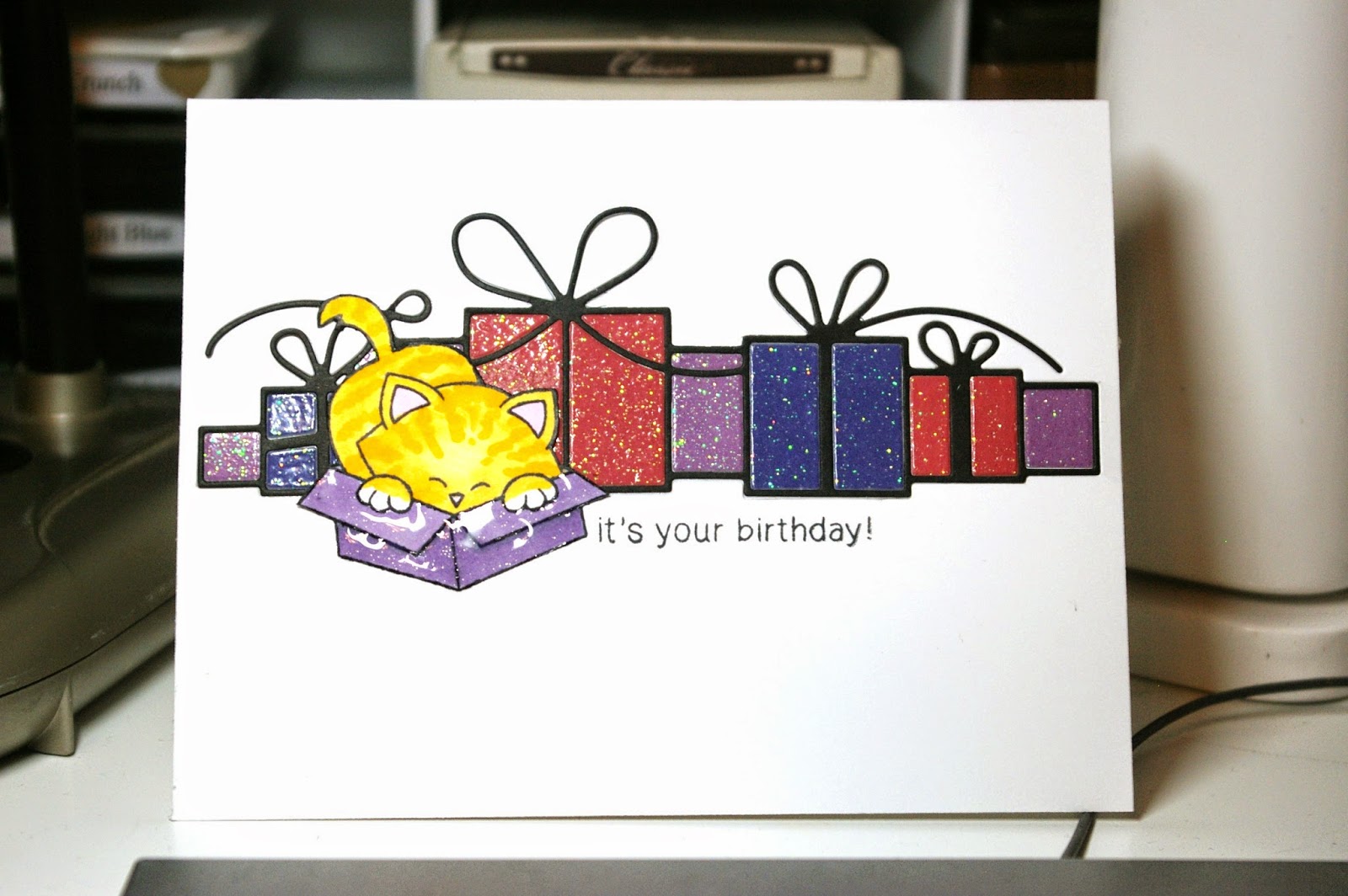 For this only slightly more than one layer card, I used a technique from a class I took a month ago to do some partial die cutting.  I stamped the oh so cute kitty in a box from Newton's Birthday Bash and colored him with my copics.  Then I very carefully cut around the kitty and slid my Simon Says Stamp Brilliant Gifts die behind it.  I cut out the present die from the card, then again from black card stock and some DCWV glitter cardstock.  Then it was just a matter of rebuilding the presents behind the kitty.  I added some Wink of Stella to the kitty's box and covered it with Glossy Accents.
Added by Zoey and the furballs at 8:57 PM 5 comments:

For today's card, I started again with the mug.  I stamped it out, added the sentiment, colored the coffee and added some shading.  Then I fussy cut it (gasp, more fussy cutting).  Once that was done, I started with the other orange card base I made from card stock from the kit.  I used the stitched frame from the My Favorite Thing's Blueprints #13 to cut out a piece of vellum and the patterned paper.  I then layered the patterned paper on the card base before attaching the mug to the vellum.  I added glue to the vellum behind the mug and adhered that over the pattern paper.  I added a few dots of glue in the upper left hand corner and hid them behind a few sequins.  A few strategically placed dots of glue at the other corners secured my vellum and completed the card. 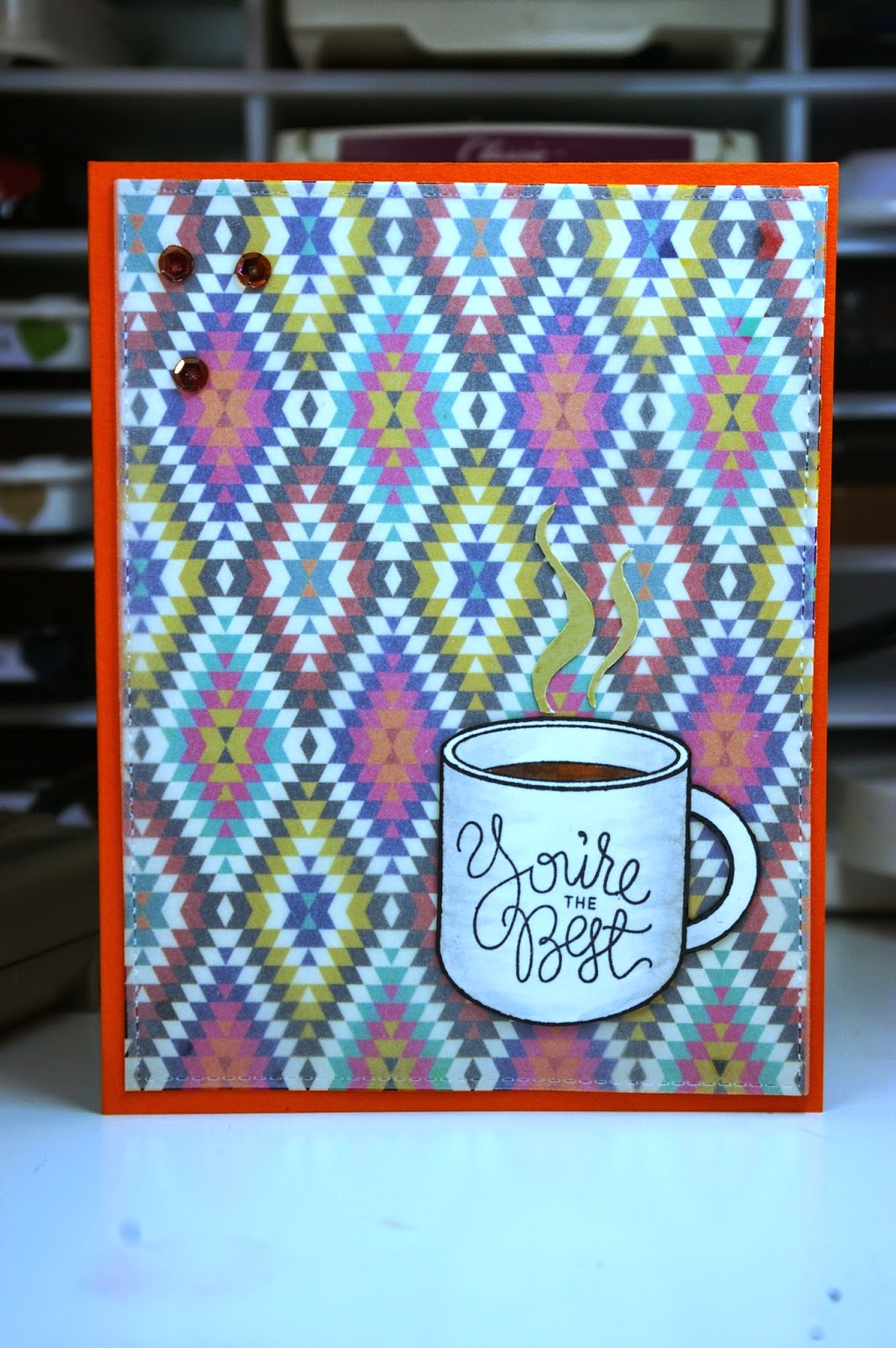 Another Card from the Simon Says Stamp October 2014 Card Kit

Let me start by confessing that I'm not actually in love with today's card.  It's okay.  I think it's that I don't really like the bright colors and I'm not thrilled with my coloring.  They seem just a little bit too much, but I still had fun making it.  I started by die cutting some white Neenah card stock with my American Crafts/Amy Tangerine Plus One die.  I colored the heart with a copic and stamped my sentiment.  On the inner panel of the polaroid, I stamped the mug, colored the coffee, added highlighting to the mug and colored the background.  Then I cut the patterned paper down to slightly smaller than my card base and added my completed polaroid on top to finish it off. 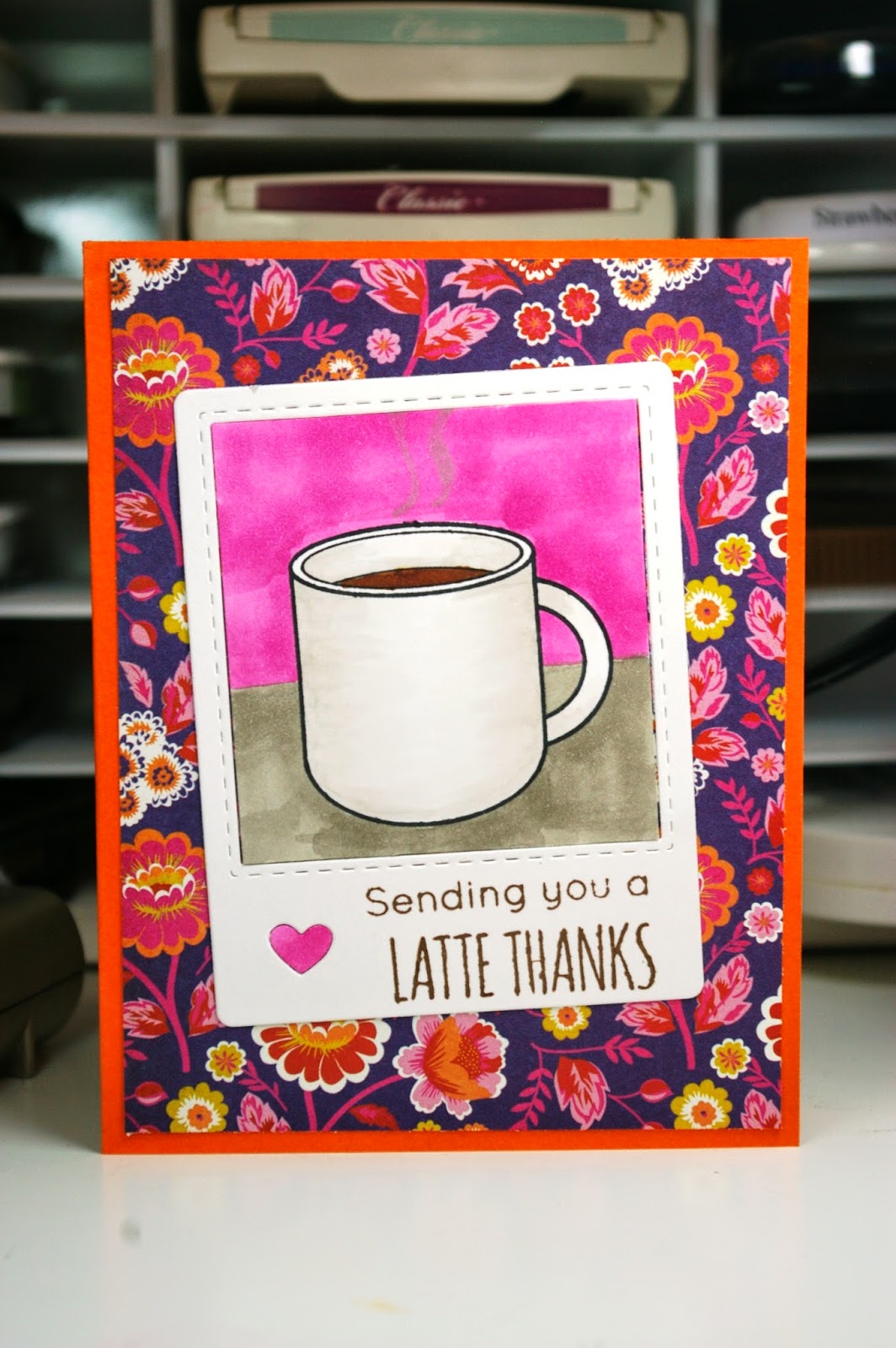 Today's card started with an accident.  I stamped out the mug and added the orange stamped stripe at the bottom and the sentiment, but somewhere along the way while coloring the coffee, I ended up with a dot of brown on the mug.  Boo!  Not ready to just throw it all away, I started adding dots all over the top of the cup.  When I was done, I decided it was good enough to keep, but I needed something that could handle the orange.  I decided to use the orange left over from a previous card along with this funky patterned paper with hints of orange.  I cut the funky paper down just a bit smaller than my card base, cut the orange to about a third of the size of the card and layered them up.  I stamped the steam in Khaki and (gasp) fussy cut it.  Then I added my cup to the card, the fussy cut steam and some sequins from the kit to finish it off. 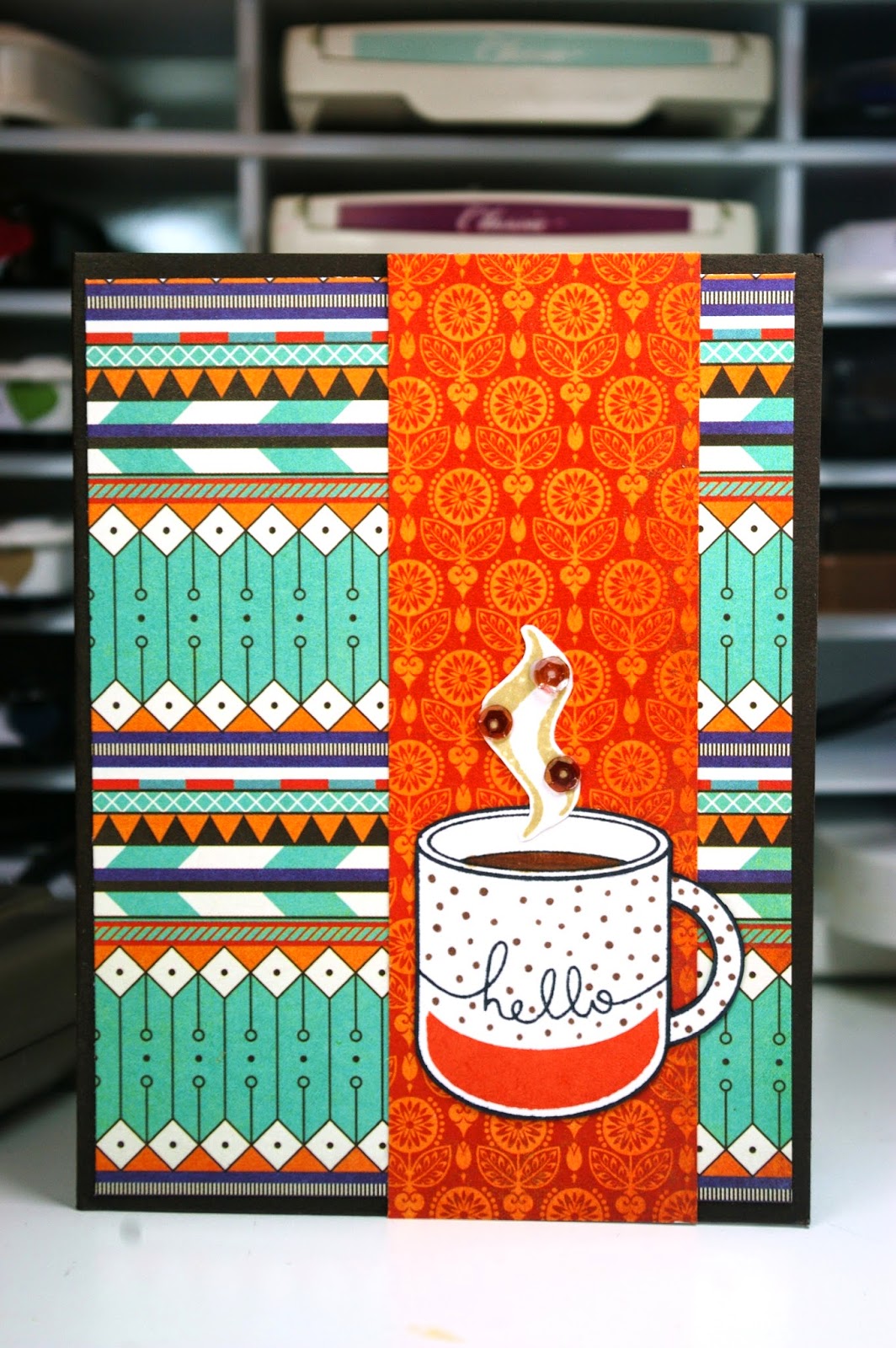 After making some card inspired by the sample pictures, the creative mojo just started coming through on it own and I began making cards without any outside inspiration.  For this card, I started by stamping the mug and adding the coffee and the sentiment.  I then fussy cut (yes, again) the mug out.  I wasn't sure what to do with the background but I loved this brown paper with swirls on it even though it seemed a bit bright and psychedelic.  Because I loved the pattern, I wanted to show it off, but maybe tame it down a bit.  I cut the page down just slightly to fit the card base with a bit of a frame.  Then I centered the Simon Says Stamp Frames die on the paper and cut a second frame in white.  Then it was just a matter of inlaying the center panel, the white frame and the outer panel on my card base.  I added my mug and a few Pretty Pink Posh sequins from my stash to finish it off. 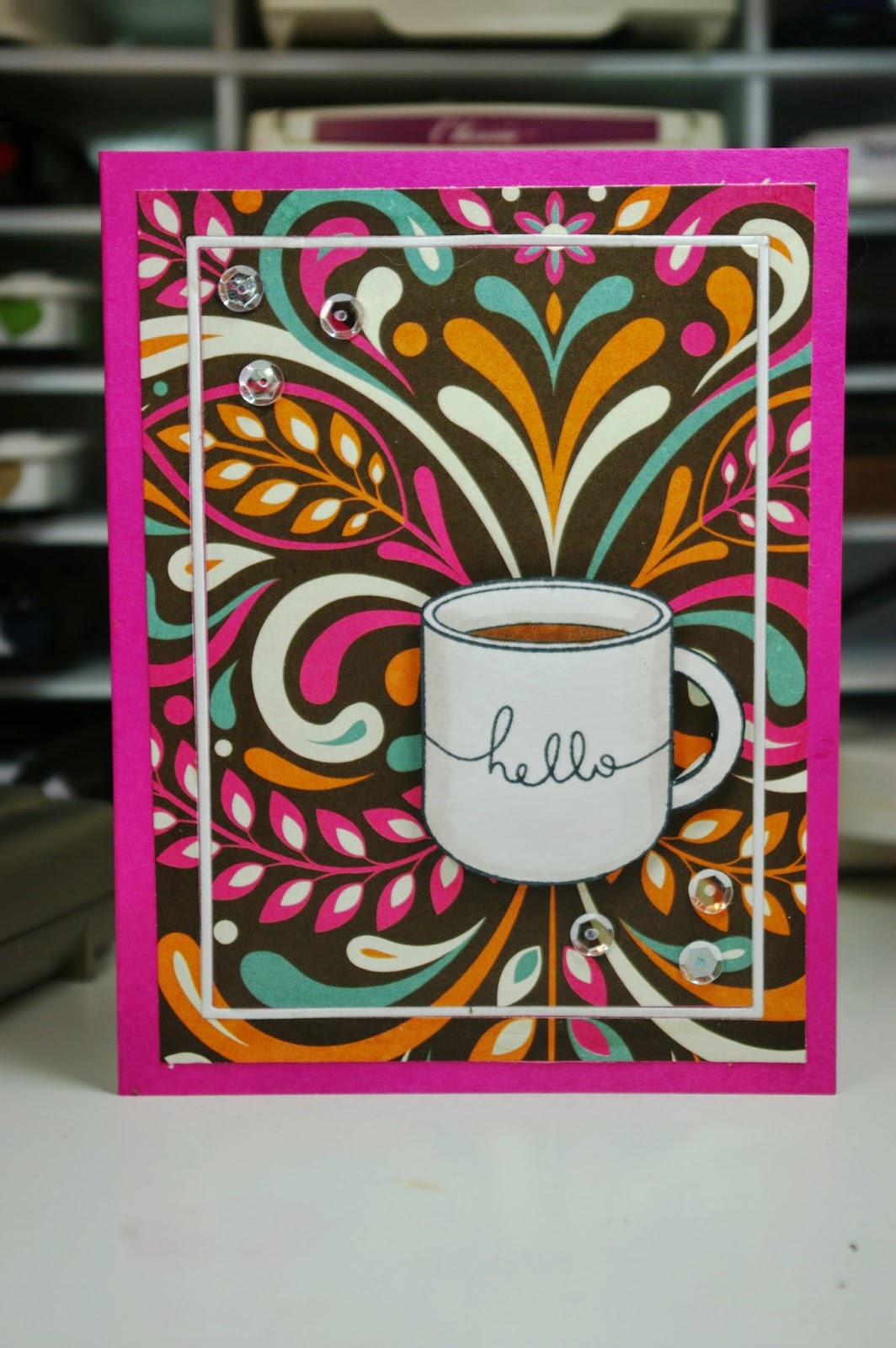 For my final card inspired by the sample cards with the October 2014 Card Kit from Simon Says Stamp, I put my own spin on a card made by Lorraine Aquilina.  You can find her card on her blog here. I loved her card so much, I only made a couple of changes. I die cut the tea cup out of the same paper, but I switched out the center heart for a blue one so it would stand out a bit more. I cut down a strip of the striped paper and two strips of the orange paper.  I cut a white piece about three quarters of the size of the card base.  Then it was just a matter of taping down the strips on the card base, stamping my steam in the Khaki ink that came with the kit and then layering on the cup I had die cut.  Unlike the sample, I added a dark piece in my cup to look like the coffee I would usually have in my cup.  I also switched up the sentiment because, well, I need thank you cards.  It seems like I'm always low on those and I added a few sequins instead of the speech bubble. Super cute. 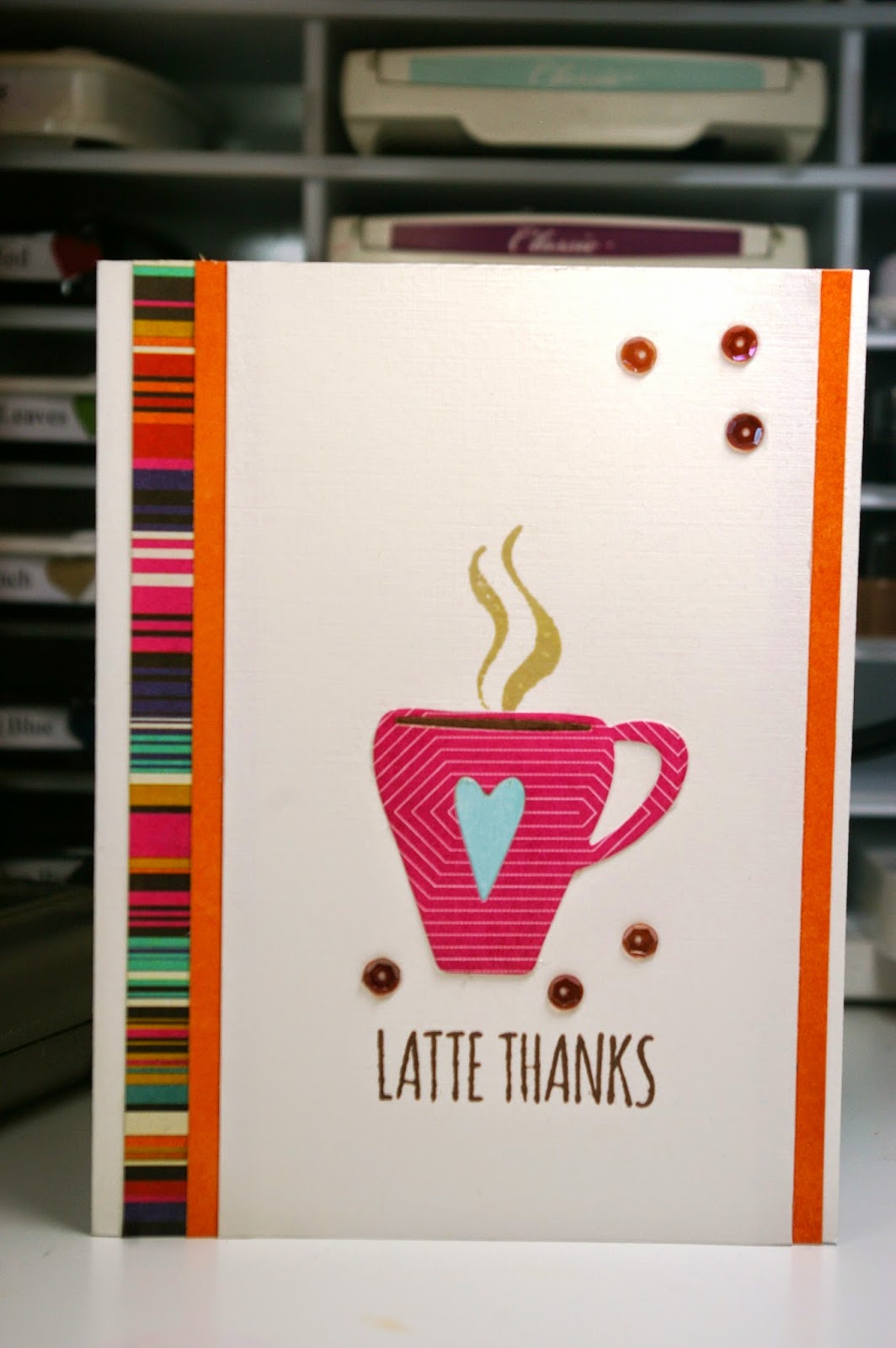 Added by Zoey and the furballs at 5:00 PM No comments: 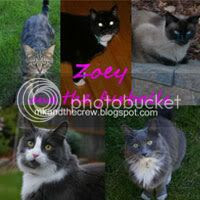 Places were my work has been featured or won!

I'm Learning Something New with Shimelle 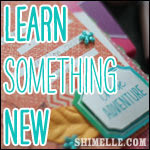 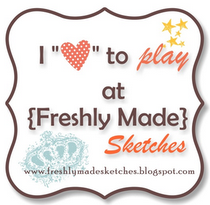